It is estimated that 60 percent of the global market for architectural paints, coatings, and finishes are water-based, or waterborne, instead of solvent-based. In the U.S., use of the more environmentally friendly water-borne paint is even higher—between 80 and 85 percent. However, solvent-based paint is still predominantly used in product finishes on machinery, automobiles, and appliances for which a smooth surface finish or durability is crucial. Other special-purpose coatings such as maintenance, traffic, and marine paints are also still manufactured with solvents.

The drive for more environmentally-friendly coatings has been from both above and below. Consumers are pushing for more coatings with fewer health risks and more ‘green’ properties, while environmental regulations introduced with the Clean Air Act have led to coatings manufacturers, suppliers and applicators striving for the lowest possible emission footprint. In particular, striving for compliance with the EPA-issued nationwide Architectural and Industrial Maintenance (AIM) Coatings rule limiting emissions from volatile organic compounds (VOCs). For coatings that do not comply, there are ways to offset the discrepancy, reducing the cost of environmental compliance. Using the proper abatement technology on paint, coating, and finishing applications can actually lower your cost of environmental compliance for airborne contaminants.

Over the last 20 years, the Environmental Protection Agency (EPA) regulations under the Clean Air Act have driven capture efficiencies toward 100 percent, meaning emissions are prevented from ever entering the atmosphere. Properly designed hoods and enclosures protect employees and the community at large from potentially harmful exposure to fugitive emissions from paint overspray. Whether you are painting large airplanes and trains or smaller vehicles such as automobiles, paint booths generally require a large amount of airflow. Even when recirculation is maximized within the paint booth, large operations can exhaust fumes in the 10,000s of standard cubic feet per minute (SCFM). These emissions are often very low in concentration, partially because of the intermittent nature of painting operations, but also because overspray is somewhat diluted. Most painting processes emit only about 50 to 200 parts per million (PPM). This is fairly low compared to other emission control applications.

Because of the low concentrations of emissions coming from paint booths, a regenerative thermal oxidizer (RTO) has been the preferred technology to capture and destroy painting process emissions for many years. Even though RTOs are incredibly efficient, they rely on a steady stream of emissions from the process to fuel combustion of incoming contaminants. The large airflow volumes and low concentrations that paint booths emit can result in a substantial need for supplemental fuel, generally in the form of natural gas. This use of supplemental fuel lends to higher levels of carbon dioxide (CO2) and nitrous oxides (NOX) emissions and creates secondary air pollution from the actual abatement device. 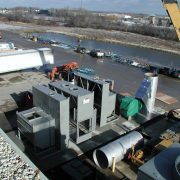 Lower operating costs and carbon footprint with an emission concentrator

As an air pollution control device, a concentrator can take exhaust streams at or near ambient temperatures and concentrate it so that the airflow actually sent to the oxidizer is reduced by a factor of eight to 20. This greatly reduced flow is typically rich in emissions and much less of an operating cost burden on the oxidizer system. In fact, it generally facilitates self-sustaining, fuel-free destruction. In operation, the high-volume, low-concentration airstream passes through a rotor concentrator wheel where the emissions are stripped and adsorbed onto the wheel. The majority (about 90 percent of the total air volume) of this clean air can then be exhausted into the atmosphere. The remaining clean air (about 10 percent of the total air volume) is heated to an elevated temperature to be used as desorption air.

The concentrator wheel rotates continuously, transporting adsorbed VOCs and HAPs into a desorption section. In the desorption section, the organics are desorbed from the adsorptive media with the low-volume, heated airstream. This low-volume, highly concentrated laden air is then processed by an oxidizer. 50,000 SCFM of paint booth exhaust can be routed through a concentrator system that will compress emissions into about 5,000 SCFM of contaminated air. Rather than using a large oxidizer to handle all 50,000 SCFM, an oxidizer for only the 5,000 SCFM is needed with the accompanying use of a concentrator. The concentration in this 5,000 SCFM stream will be approximately 10 times higher than in the booth exhaust. Because the oxidation of these VOCs and HAPs releases heat that is needed in the oxidizer, much less supplemental fuel is consumed.

Where to find environmental products and suppliers?

There are a lot of companies in the U.S. with experience in the paint and coating industry. In the table below you can find some of them.

So why doesn’t every paint booth use a concentrator?

Industrial Coating Equipment – All You Need to Succeed