If you have ever looked at the colorful, glossy sheen of a newly-painted car and thought “that would make some amazing cufflinks” or “I’d love some earrings in that color” then you are in luck. Fordite, or “Detroit agate”, is a stone made of exactly that: automotive paint layered in swirls of riotous, beautiful color. At first glance it looks just like another agate, but its origins are far less natural. It was created, layer upon layer, by a build up of spray paint in car factories. Detroit in particular, the center of the American automotive industry, is a major source of fordite.

The story of fordite 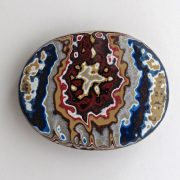 These beautiful layers represent the cars and colors that the factory produced.

Cars used to be spray painted by hand, before being taken to the oven for firing. Without today’s precision technology, overspray was a common occurrence; the racks that transported the cars from paint shop to oven would accumulate all the accidental spray and excess paint that would drip from the cars. The enamel paint would then be “baked” onto the car, and the accumulated excess would be baked onto the racks, each new car adding another layer to the paint parfait. Over time and multiple bakes these layers of paint hardened into a rock-like state (“enamel slag”).

Eventually the inches of build up would need to be removed. The story goes that factory workers would break open the rock to find the myriad colors within and pocket it to take home to the wife or kids, or simply for themselves. When the automotive industry started automating the painting process, beginning in the late 1970s, we lost the production of fordite. With the new modernized methods, overspray was virtually eliminated and fordite become an historical curio.

A painted glimpse at history

When you look at a piece of fordite, you are looking into automotive industry. Each colorful layer represents a car that came through the factory, a customer thrilled with the shiny enamel coat of their new vehicle, perhaps proud of the first family car. What might strike you is the sheer range of colors depicted. The four most popular car colors today are white, black, silver, and gray. But as fordite shows, the colors in the middle of the last century were far more adventurous – pastel yellows, aqua blues, oranges, and purples are all represented.

The existence of fordite is also a relic of a time period where enamel paints were used to coat cars. The 1930s saw the development of alkyd enamels, which were superior to the paints previously available because they were easily sprayable, they formed a very durable layer, and were to quick to apply as they required fewer coats. There were also more colors available, and cars went from staid black to every color imaginable. Alkyd enamels were replaced in the 1960s by acrylic enamels. The attraction of enamels was the hard, glossy finish and the short drying time, but the 1980s saw the introduction of urethane and polyurethane paints and the enamels could not stand up to the competition. Our only reminders of that period are the flamboyantly-colored classic cars that take their Sunday cruises down the highway, and fordite.

Where to buy fordite

So the process that makes fordite was phased out nearly forty years ago, but can you still find it? Enamel paint was used to coat cars for forty years, and despite the fact that most of it ended up in landfill, there is still fordite around. It is sold as polished gems, rocks, and jewelry. It can even be differentiated by its source factory, and is popular enough that there are fakes out there. Costs vary, but then it is difficult to put a price on a many-splendored chunk of coating and automotive history.