When you live near a suitable market, getting fresh food is not difficult at all! Also, when you have a way to properly store the food, and you can consume it all before it goes bad there are no problems here. Everyone can relate to fresh food like lettuce, green onions, strawberries, and other fruits and vegetables are prone to going bad relatively quickly after being purchased. Though, making it unappealing to many consumers, not to mention the waste that results. The company Apeel Sciences may have a solution. It’s an invisible food coating! Their invisible, edible food coating can keep fruit and vegetables fresh for twice as long.

The company developed a micro-thin ‘peel’ or invisible food coating that, when applied to fresh food, helps preserve said food for a long duration. For example, a lemon covered with Edipeel, as the company calls it, stays fresh for several weeks whereas a non-coated lemon would have gone bad and begun decomposing long before that.

The same is true for other fresh foods like heads of lettuce, strawberries, and more. Apeel Sciences recently showcased an example of this -demonstrated in the video above- that lemon, for example, only started to show signs of aging after about fifty days whereas the non-treated lemon was quite shriveled and moldy by that point.

The micro layer works by trapping moisture inside the fruit and keeping air outside of it, reducing how much water the fruit loses while also slowing down oxidation. Even better, this layer is said to be completely flavorless and invisible and, obviously, fully edible. Based on Apeel Sciences’ website, it seems different formulas are used for various types of foods — the site shows a ‘tomato formula,’ for example, as well as formulas for blueberries, mangos, avocados, and bananas.

Apeel has developed a second coating formula for when plants are growing. Its ‘Invisipeel’ barrier protects crops from pests such as funghi without the need for harmful pesticides. Funghi randomly blow on to different surfaces, and then they check for molecular recognition of that surface,’ Apeel CEO Dr James Rogers says.

‘And if they recognise that surface as being molecularly similar to what they’ve been evolved to see for the last million years, then they say, “Aha, this is food”.’ But with Invisipeel applied, fungus won’t recognise the produce as food, ensuring the plants are kept safe from the pests. 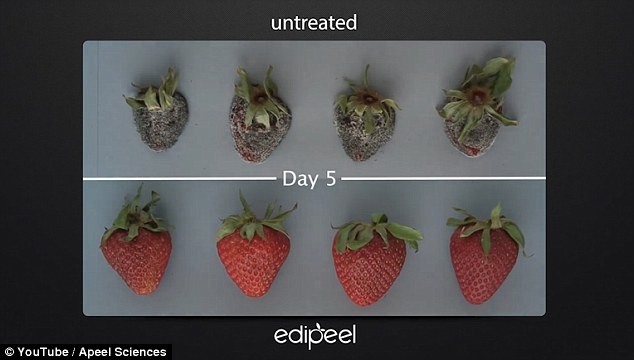 How does invisible food coating work?

Apeel claims that, using Edipeel, supermarket produce will last longer on the shelves, and consumers can buy food that lasts longer in their homes. Roughly one third of the food produced in the world for human consumption every year – approximately 1.3 billion tonnes – gets lost or wasted. In the US, around 40 per cent of food grown is wasted along various points in the produce chain.