Los Angeles is a natural pollution trap. The surrounding mountains hem the city in, and lead to temperature inversion. This traps the daily emanations of millions of cars and trucks, and it forms smog. Prolonged exposure to smog leads to respiratory diseases, and if serious enough, death. Los Angeles is not the only city that suffers from this effect, Denver also suffers from temperature inversion, as does Mexico City. Smog and pollution is a global problem, and around the world architects and environmental scientists are working to find a solution. One of these is smog-eating coating.

What is a smog-eating coating?

Smog-eating coating is a coating which uses the properties of titanium dioxide to clean pollutants from the air around it. Titanium dioxide (TiO2) is commonly found in products such as sunscreen, food coloring, and paint, where it is known as the pigment titanium white. When exposed to sunlight, titanium dioxide reacts in a unique way; it absorbs oxides of nitrogen (NOx gases, some of the key components of smog) and converts them into nitrates, which simply wash off the walls. The best bit? The titanium dioxide which does all the work does not deplete as it cleans, so the performance of the product does not lessen over time. The pigment is being used in cement, tiles, and coating, as part of projects around the world.

One of the properties that make titanium dioxide so exciting is just how flexible it is. The pigment can be used across a wide range of applications and it will work to clean the air of smog-producing elements. Some of the international projects using the technology include: 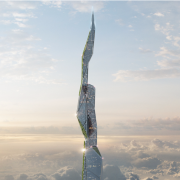 For Expo 2015, a building showcasing a new type of cement created by Italcementi (an Italian cement producer) was unveiled. The cement is called i.active BIODYNAMIC (or TX Active), and it is a flowable mortar grout which was used cover the entire external surface and inner facings of the Palazzo Italia. Using titanium dioxide, the cement captures pollutants and converts them into salts. The cement is made from 80% recycled aggregates, including Carrara marble, the material used to make Michelangelo’s David and the buildings of the Harvard Medical School.

Produced by Arconic, this titanium dioxide-based coating is applied to their proprietary painted aluminum sheeting (called Reynobond) to make it smog-eating. These architectural panels come in a variety of colors, and uses a coil-coating application method to keep costs low. 10,000 square feet of these panels has the cleaning power of 80 trees. 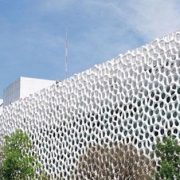 This project by Berlin-based firm Elegant Embellishments uses smog-eating tiles (called “proSolve370e”), to cover a hospital in the city known for its smogginess. These tiles are designed to neutralize the chemicals produced by 8,750 cars every day. As well as being smog-eating, these tiles are also antimicrobial, made from a thermoformed plastic which is designed to look like a webbing or honeycomb covering the building. The shape slows the wind, creating turbulence and allowing for a greater degree of pollution absorption. The benefit of the tiles is that they do not need to be on a building. They form modular decorative ornaments which can be installed near where traffic is heavy.

With the high level of smoggy pollutants in the L.A. air, the buildings in the city becoming layered in deposits from smog and car emissions. The Los Angeles Central Library was graying because of this, and they commissioned DryWired  to apply their coating to the building. LumActiv is a hydrophilic coating which uses nanotechnology as well as titanium dioxide to obtain results. The coating not only eats smog, but it will also keep the central library building clean year after year.

Where to find smog-eating coating products and suppliers

Smog-eating coatings products are moving out of the world of cutting-edge design and into one of possibility. There are several products and suppliers operating in the US market. If you wish to use a smog-eating coating or product in your next project, get in contact and let us find the solution for your coating needs.

Fordite: The Gem Made From Automotive Paint