You remember the Looney Tunes cartoons you used to watch as a kid, where Wile E. Coyote would dig an impossibly round and black hole for the Road Runner to unwittingly fall into, only for the Road Runner to lift it from the ground and carry it away like a piece of paper? That illusion is no longer the realm of cartoons. Vantablack paint is a coating so black, it makes 3D objects appear two-dimensional; so black, it only reflects 0.036% of the light that strikes it; so black, it has the Guinness World Record for the World’s Darkest Man-made Substance.

Vantablack paint is not made, but grown 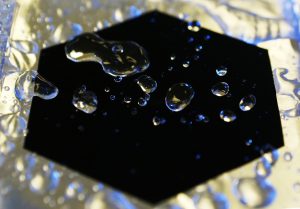 Water droplets on Vantablack appear to float over a void, with no reflection from the surface.

The team of scientists at Surrey NanoSystems who invented Vantablack were not trying to create the ultimate black for your Edgar Allan Poe phase. They were experimenting with carbon nanotubes; the name Vantablack stands for Vertically Aligned Nanotube Array. Carbon nanotubes are hollow structures with walls formed from atom-thick sheets of carbon, kind of like a straw. Essentially, a Vantablack coating is a forest of these straw-like carbon nanotubes, around 20 to 30 microns high. A human hair is about 75 microns across.

Each square inch of Vantablack contains billions of nanotubes, which are “grown” on a substrate in a chemical vapor deposition chamber. These infinitesimally small structures are just the right size to trap light, bouncing it between themselves till it is absorbed, meaning next to no light is reflected back at us. This also means that Vantablack is actually not a color, in the same way that black is not a color. It is, instead, the absence of light; the absence of color.

So it’s super black, but what is it for?

Because Vantablack absorbs 99.96% of visible, infrared, and ultraviolet light, it has a diverse range of possible applications where a key desire is reducing stray light. Optical sensing instrumentation in space applications, such as earth or star observation systems, can greatly benefit from the eliminating the contaminating influence of sunlight and other bright light sources.

In telescopes, Vantablack can ensure a better signal-to-noise ratio and improve performance, giving the ability to see the faintest stars. Spectrometers used in medical and scientific instruments also benefit from this application. Vantablack could also be used in the automotive industry for vision systems, dashboard displays, and headlight beam control. Creating the perfect beam of light also has applications in architecture, theater, and cinema, to create the most dramatic or crispest images and effects. 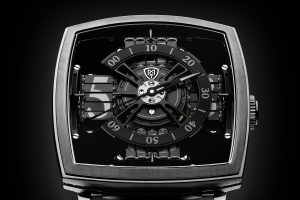 So Vantablack is the new black. Surrey NanoSystems have sold artist Anish Kapoor exclusive artistic rights to the use of Vantablack. So far he has collaborated with Swiss watchmaker MCT to produce a Vantablack-tinted watch, in an edition so limited they only made ten. At $95,000 plus tax, you can see why.

One British artist decided to protest the exclusive rights to Vantablack. Stuart Semple created a pigment, the world’s Pinkest Pink, and made it available to everyone – except Anish Kapoor. However, Anish Kapoor did get his hands on some; he demonstrated this with an Instagram post showing him with his middle finger coated in the Pinkest Pink and the caption “Up yours #pink”.

Semple has now produced a black acrylic paint to rival Vantablack, Black 2.0, which he claims is the blackest paint in the world. This paint is available for “the benefit of all artists”- except Anish Kapoor.  Despite the infamy of the artistic feud, artists will not find Vantablack paint for sale in the near future.

Where is Vantablack for sale?

If you aren’t Anish Kapoor there are some very strict regulations around who can buy Vantablack paint. Only verified companies, research facilities, and educational establishments can order a sample of Vantablack. The coating is not available to private individuals, yet. This does not stop people asking – Surrey NanoSystems have had requests to coat supercars, dice for rich gamblers in Macau, even the inside of an eggshell.

If you do want to want to use Vantablack in your project, Surrey Nanosystems will evaluate the application, substrate, and requirements, to make sure that it is a viable option. Samples are available on aluminum backing, aluminum foil backing, copper backing, or you can order an educational sample. The educational sample is a “crinkled” foil sample in a display case. 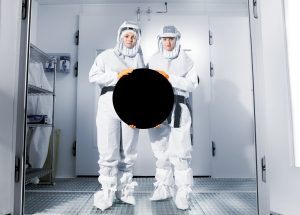 Since the original Vantblack was announced, the scientists at Surrey NanoSystems have been busy. In order to make Vantablack more flexible as a coating, they developed Vantablack S-VIS. This version is applied by spray painting, allowing the paint to be applied to more materials and complex shapes. Unlike the original it does not need to be grown in a vacuum chamber.

Surrey NanoSystems also have a new product in development called VBx1 (and 2). This product works solely in the visible spectrum, is sprayable, and it does not fall under Kapoor’s exclusivity agreement. The Vantablack VBx 1 and VBx 2 coatings are solvent based, pigmented coatings dispersed in a carrier solution. They are non-nanotube coatings, especially formulated for more design-based applications. In fact, Vantablack VBx2 was recently used at the Pyeongchang Winter Olympic Games. Architect Asif Khan coated a pavilion with VBx2, creating the “darkest building on earth”.

But don’t get too excited – it won’t be available as a spray paint in your local art store any time soon. There are a complicated series of after-application processes which mean the day when you can buy Vantablack spray paint at the nearest Home Depot is still a long way off.

All images are courtesy of Surrey Nanosystems

Why Everyone Is Talking About Polyaspartic Coating